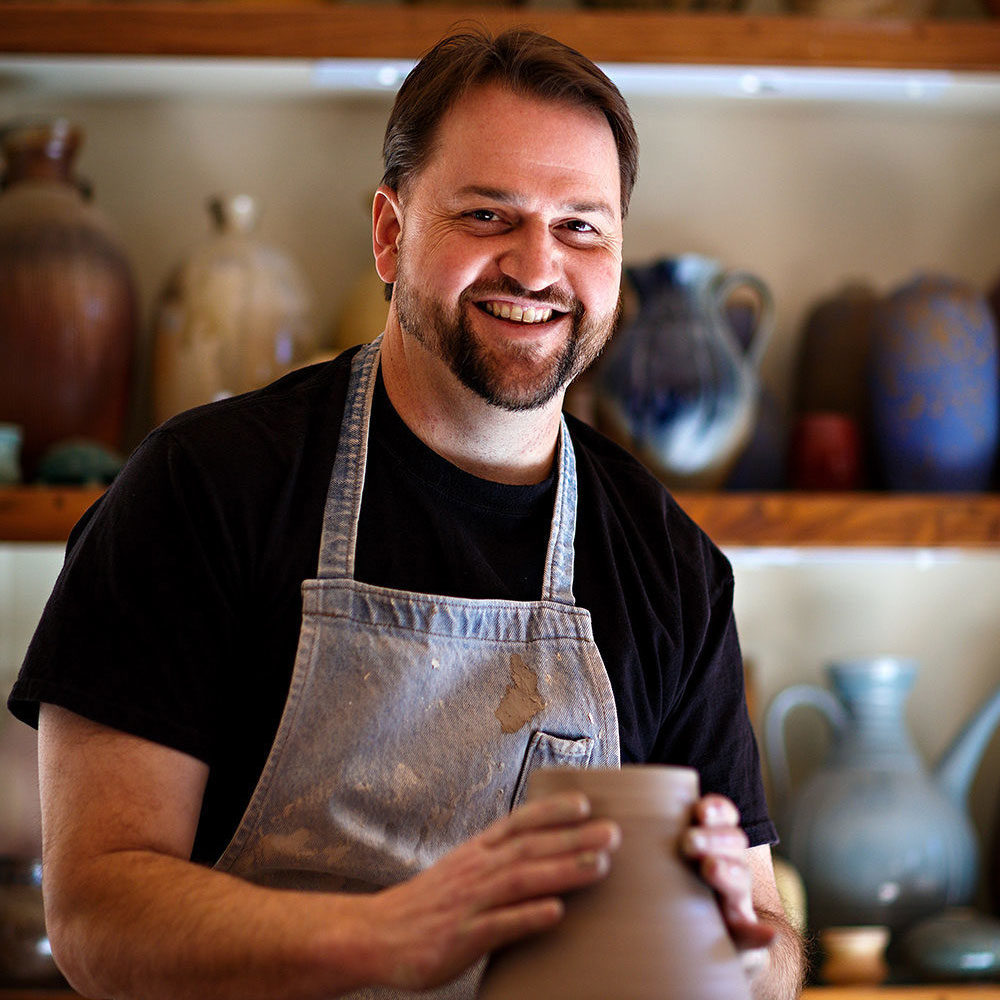 “Ben Owen III (b. 1968) is an American studio potter working and continuing a family tradition in Seagrove, NC. Colorful glazes and distinct forms are a signature style.”

[...It is an honor to have the opportunity to enhance people's lives through our creations in clay....]

Ben Owen III (b. 1968) is an American studio potter working in Seagrove, North Carolina. Born into a traditional pottery family, he was first introduced to clay by his grandfather when he was eight years old. Bens natural talent and unusual level of interest led to an apprenticeship with his grandfather and father by age 13. Through high school, he carefully studied the shapes, glazes, and traditions of the Owen aesthetic and learned to appreciate the history and legacy of generations of craft.

During college, Bens interest in form, design, and color piqued; and he began to forge his own unique path in clay. Through technical exploration and academic influences, Bens clay vernacular began to evolve. Travels in the US attending workshops and conferences along with a fellowship in Japan, extended his continued research. He has said, My approach to working in clay is inspired by many influences. Tradition and vision merge to forge the future, as I honor the historic Owen aesthetic while creating a new, unique body of work. Culture, blended with influences in nature, inspire my work.

With studies in China, Japan, Australia and Europe, as well as in the university setting, I have continued to create a unique identity from culture and nature. Bens recent passions have included glaze creation and experimentation. For some pots, I use a four-chambered wood kiln with a firing process of up to four days. The prolonged exposure to ash and heat develops a wide range of color and texture on the clay. Other glaze techniques have evolved in a gas or electric kiln with a precision in temperature control to manipulate the finish. Some pieces are re-fired to develop layers and depth on the finish.

Works created by Mr. Owen are included in numerous museum collections including the Smithsonian Museum in Washington, DC; The International Folk Art Museum in Santa Fe, NM; The Schein-Joseph International Museum of Art in Alfred, NY; and The Mint Museum of Craft and Design in Charlotte, NC. Over the past decade, Ben has addressed the needs of designers and collectors to create custom works to be installed in a series of premier hotels and public spaces including the Ritz Carlton Hotel in Tokyo, Japan; Umstead Hotel and Spa in Cary, NC; the Mandarin Oriental Hotel in Boston, MA; and Grand America Hotel in Salt Lake City, UT. Many of these vessels are much larger in scale and carefully designed to enhance the hotels stunning interiors.

Mr. Owen has received many awards and honors, including North Carolina Living Treasure, 2004; and induction into the North Caroliniana Society.